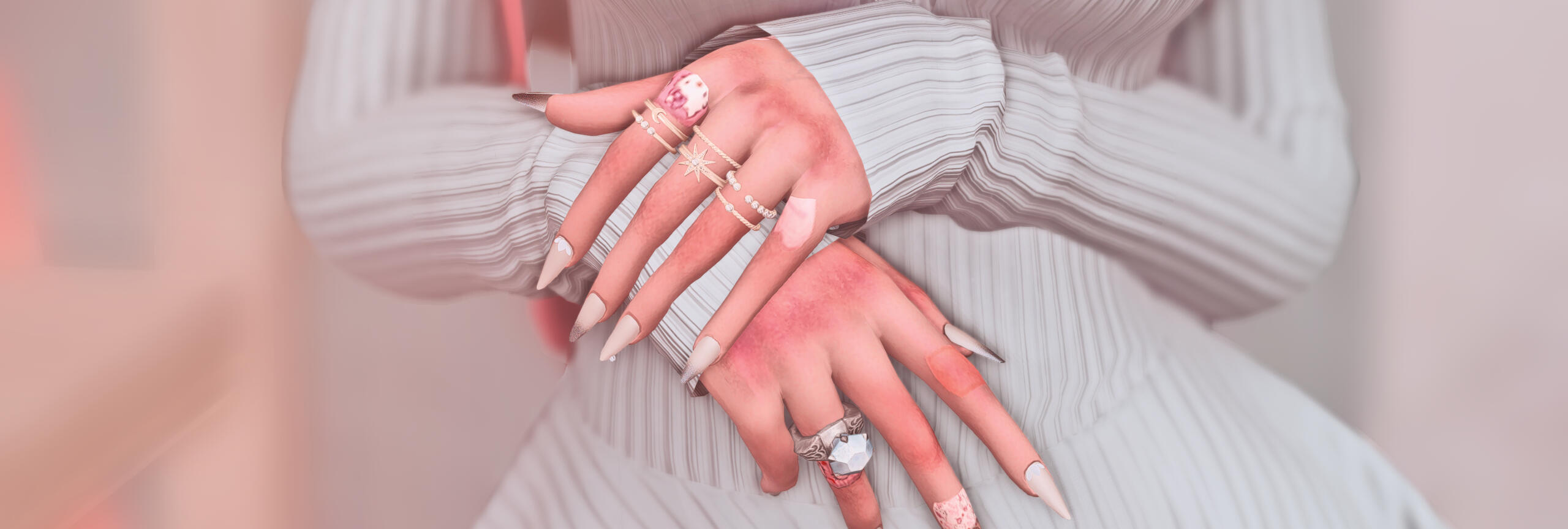 "Fate can be cruel, but a smile better suits a hero."

A kind soul with darkness beneath.

Tamago grew up on the streets of Ishguard a street rat, begging for scraps where she could. She took up sewing as a way to cope with her stress and to keep herself warm.In her teen years, she was lucky enough to get an apprenticeship with a proficient seamstress who was known as cruel but skilled. She worked under her for many years, asking for nothing but a roof over her head and some food. She was berated and beaten down for her ideas and trained very harshly. Her skill however spoke for itself.Thanks to House Fortemps, she was able to escape the life she had with her aggressive mentor and eventually moved into the manor for a time while she saved up to purchase her own shop. After a death in the household, she took her leave, opening her shop and moving forward with her life.Recently, she has purchased a large plot of land in The Goblet where her and her partner, Mozu Ernalona, live and operate their business; Potions and Petticoats. They use the business as a means to help others and make the world a better place, namely for the youth of Ishguard.

Races: Au Ra
Location: Mountains of Gyr Abania
Basics:
Yokubo is a bustling village in the Gyr Abanian mountains home to a tribe of Raen Au Ra and their families. While being relatively hidden, the village has maintained itself for many generations and has had very few issues in regard to famine, violence, or death. Most of the inhabitants are kind, well-meaning people who wish only for the bliss and happiness of others, no matter their caste.The strangest thing of note would be the village’s reverence to the primal Shri Lakshmi who they call their “Shifuku no Haha” or “Mother of bliss”.

Markings & Clothing:
They have naturally have stark white, opalescent scales in contrast to their Doman and Hingan cousins with their more muted coloring. The Raen living here are segregated by caste using tattoos as a signifier.

Leadership & Organization:
Yokubo is led by the wealthiest family in the village, the Zeitaku. The family itself is matriarchal and so sprawling that it almost has a caste system in itself.The true leadership of the family, and by proxy the village, falls to the oldest living woman of the Zeitaku family. She is the figurehead and representation of the village’s deity, Sri Lakshmi. She leads the village in prayer and is rarely seen outside of the Zeitaku estate other than festivals.Her direct family acts as caregivers and personal guards to the matriarch and are revered as the closest to Sri Lakshmi herself by the rest of the village.Any family members more removed act as servants to the estate or priestesses of Sri Lakshmi, still being paid well and living quite a lavish and comfortable right. It is their duty to uphold the family name in the public eye.Below the Zeitaku family are the crafting caste. These are the families of masters in various crafts. They use their talents to create an opulent and rich lifestyle for the Zietakus and their associates as well as provide basic goods to the villagers. They are revered and blessed by the priestesses weekly so as to maintain the village’s way of life.The warrior caste are a group of families comprised of hunters, guards, and mercenaries that act as protection for the village and the trade routes to and from it. They are seen mostly as hired brutes, but are necessary when dealing with threats or trading for supplies.The rest of the village falls into the working caste. They are the simple employees, farmers, and builders that make up the bulk of the population. They are usually the ones hired to take trade voyages and bring back supplies in exchange for more attention from priestesses or a lavish piece of jewelry.

Occupations & Exports:
The villagers of Yokubo value anything luxurious and high class. They strive to fill their lives with excess and comfort in reverence to their chosen deity, Sri Lakshmi.Their main exports consist of high quality crafted goods such as textiles, jewelry and furnishings all with vaguely Anantan style designs. The colours are usually golds, purples and pinks and involve many precious and semi-precious stones.

✦SFW✦Crafters and Artists
Tamago is a master weaver and accomplished artist. She holds other crafters in high esteem and is always eager to discuss her craft and those of others. Show her some of your wares, explain a new technique, or ask her for tips. She'll be happy to chat!Ishguardians
Tamago is fiercely loyal to her home city of Ishguard. She loves everything about it. The architecture, the atmosphere, it truly is her favourite place on The Source. She holds others from Ishguard in high regard, especially those with station. If you used to call Ishguard home, let her know! She would love to reminisce.Criminal Activity
It's rumored that Tamago denies no customers at her shop. Due to this, she has become decently known in the underground community for dubious assistance. Need supplies for a job? Perhaps Tamago can lend a hand...✦NSFW✦Brothel Work
Tamago works at a brothel to give herself and her fiance a better life. She spends long hours at night 'entertaining' clients in her custom bathhouse. Most would think she just does it to pay the bills, but rumor has it that she really enjoys her sessions. Maybe a little too much...Laksmi's Tempering
Tamago is in the process of being Tempered by the Primal Lakshmi. She has experienced many signs, from acting slightly differently, to full-on transformations. Will she resist her new urges, or give in to Lakshmi's influence?

RP Background: I've been roleplaying for about 15 years now and playing FFXIV since late 2019. I used to play World of Warcraft on Moonguard and was in an RP guild for about 10 years until I switched to FFXIV. In real life, I spend my weekends Live Action Roleplaying both in person and continuing the stories online.

Personal Bio: Hoi! I'm Eggie and I'm a Trans-Agender person just trying to live their best life. I have a ton of pets including 2 dogs named Freyja and Mackenzie. I live with Ehlers Danlos Syndrome which is pretty disabling and leaves me in the house a lot. Thankfully, I work from home as a Voice Actor, Twitch Streamer, and Content Creator! FFXIV has given me the power to live outside my home while being stuck inside and I couldn't be happier.

A collection of screenshots of Tamago and friends.

By clicking this button you are agreeing that you are above the age of 18
CW: Sexual Content 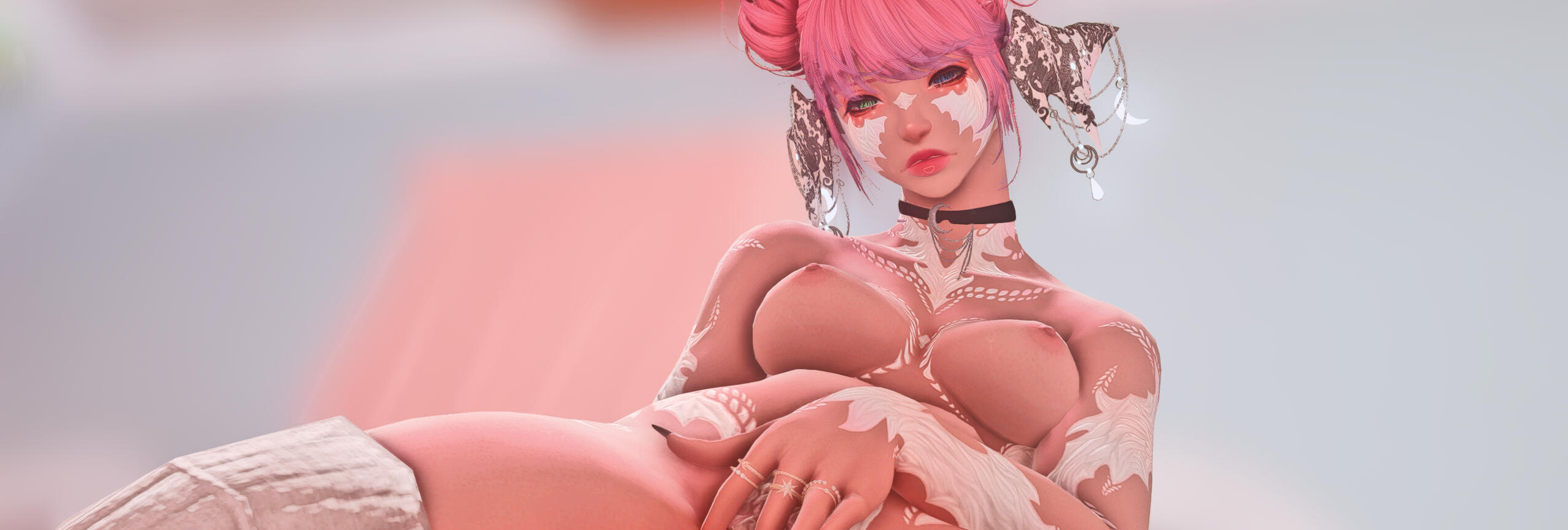 Please use this archive to learn more about Tamago's life since the start of my RP journey in FFXIV.This is for interest and viewing pleasure only and contains recountings of the story from Tamago's perspective and my own memory. Consider everything to have bias.